We all like to breathe easily but sometimes we get sinus pressure and nasal congestion and wish there was an easy way to deal with it. 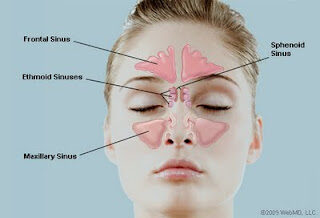 There are four pairs of sinuses in the facial region which help to insulate the skull, reduce the weight of the skull and allow for our voice to resonate within it. The locations of the four pair of sinuses are as follows:

If our body’s defenses are down then viruses, bacteria and fungi can stick to the lining of the cells in the sinuses and cause irritation and infections. One effective way to maintain healthy sinuses and to clean out the sinuses is the use of a Neti pot or nasal syringe.

WebMD offers several videos on this subject including the use of a Neti pot.

The video below also provides instructions on how best to use these tools more effectively.

Thermal Imaging is useful in identifying which sinuses may be inflamed and causing you discomfort. 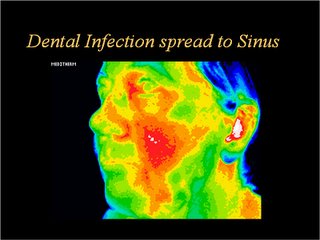 Patient presents for initial breast thermogram and region of interest study on a Saturday in March 2011. She had no complaints regarding breast health but had noticed a pain in her left lower jaw for the past week prior to her initial scan. She has been under a lot of stress at work and thinks the pain may be related to night grinding or early TMJ.

EMI report was given to patient later the same day. 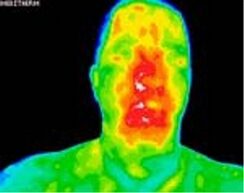 Increased activity throughout the central facial region is consistent with sinusitis/rhinitis. Perioral thermal activity may relate to some degree of diffuse dental or gingival inflammation. Increase is present towards the right side but no distinct focus is present.

There are no findings with respect to the thyroid gland and this is consistent with normal endocrine function.

There are no thermal finding to indicate TMJ or carotid artery dysfunction. There is no thermal correlate to symptoms of left jaw pain along with (possible) nocturnal jaw grinding.

By Monday, the patient was not feeling well and called in sick to work. Further diagnostic evaluation confirmed a severe sinus infection and was placed on a course of antibiotics. After three days of treatment and bed rest, the patient was able to return to work.